We arrived in Van Keulenfjord in the early morning. The fjord extends about 35 kms into Spitsbergen and we anchored not far from the entrance to the fjord at a place called Bellsund. The south side of the fjord is part of South Spitsbergen National Park. We went in a Zodiac and passed one of the ship's lifeboats that had been lowered into the water for training of the crew. 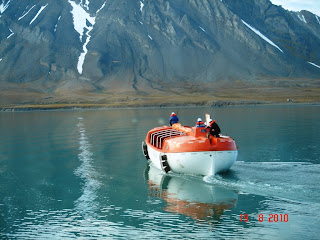 We landed at the site used by the whalers in the 1930's. It is now considered an historic site.There is one privately owned hut, with the name of Bamsebu over the door. The hut had nails sticking out all over the exterior for protection against Polar Bears. 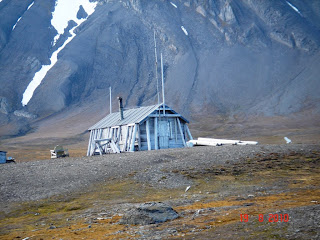 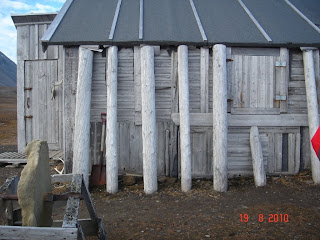 Our guides were Robin Aiello and Sue Flood and we walked over the tundra looking at the plants. The ground was very spongy as water has nowhere to go with the permafrost acting as an impermeable barrier a short distance under the surface. 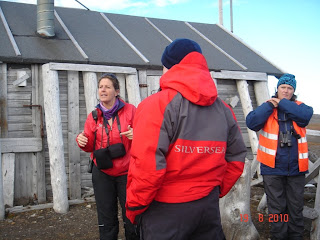 Old whaling boat and the PA II in the fjord. 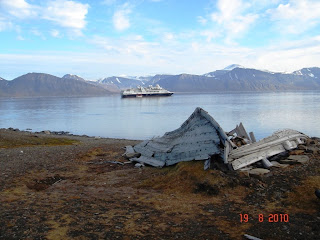 The piles of beluga whale bones left behind from the whaling days . 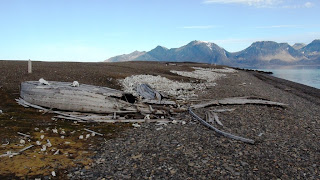 Lichens grow over the surface of the rocks creating very pretty and colourful patterns. 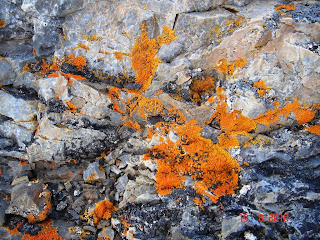 Robin Aiello giving us an insight into the local wildlife, including Lassa, our polar bear scout! 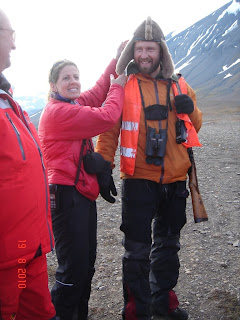 The lookout point used by the whalers to sight the beluga whales as they came into the fjord to rub their skin on the bottom of the shallows, in order to rid themselves of parasites. 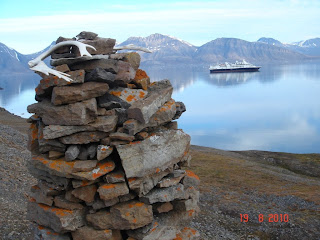 The group walking across the tundra with the entrance to the fjord in the distance. 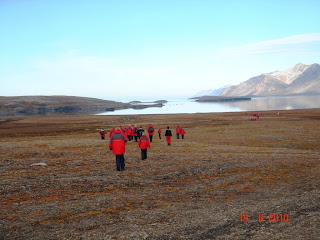 We saw tundra "trees" - miniature willows that can grow no bigger than tiny plants because of the permafrost and the extremely low temperatures. The stems are actually wood and the leaves change colour and are shed in the autumn. We saw some of the leaves already turning red. 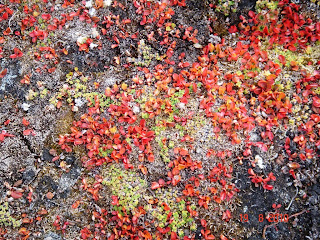 We also saw ice wedges, which are fissures created by the ice, and stone circles formed by the freezing and thawing. There were pretty yellow flowers growing in the very marshy areas of the tundra. 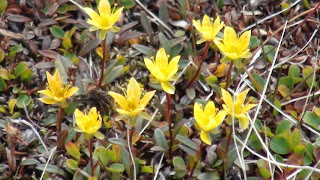 Robin Aiello showing us some antlers shed by reindeer. The males shed their antlers first, in early December, and then the females in January. 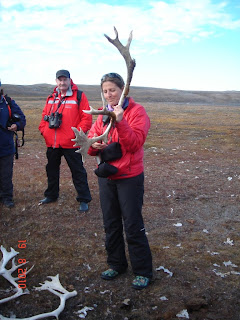 Another whaling boat abandoned on the shore. 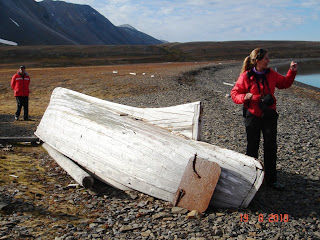 As we walked back to the Zodiacs, we saw these Polar Bear tracks in the ground. The prints were huge! We had no idea how long ago they had been made. 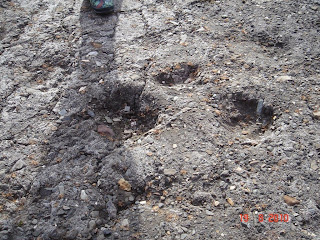 We finally saw the piles of bones from the beluga, or white, whales. The whales were caught by nets strung across the entrance to the fjord and only their oil was used. The oil is very fine and used in watch making. Nothing else of the whale carcass was used. 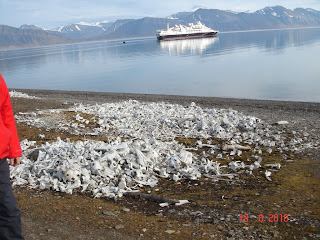 The skull of a beluga whale. It had been calculated that the piles of bones came from over 500 whales. 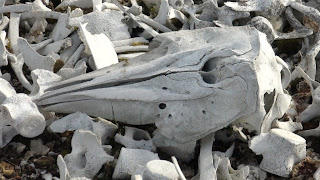 We returned to the boat and had lunch with Hazel, Sue, Eugene and Lucille and the ship set sail for Bear Island. We were soon to leave Svalbard after a wonderful week of exploration. We were sorry the trip was coming too rapidly to an end. We had seen beautiful places and met very interesting and diverse people.

In the afternoon, Robin West gave a talk on the history of Prince Albert II. It was more or less the same talk we had heard when we did the Antarctic trip in 2008. This was followed by a lecture by Sue Flood on the making of the BBC series The Blue Planet.

We had intended to have tapas in the bar, but changed our minds and had another great meal in the main dining room. Tomorrow we will have our final Zodiac expedition of the cruise, on Bear Island.